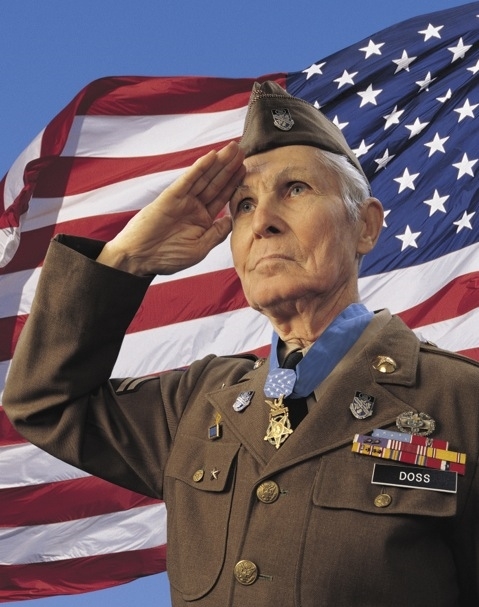 * Sponsored by the New River Chapter, MOAA, the compelling and inspirational true story of the heroic actions of Private First Class Desmond Doss, an Army Infantry Company Medical Aidman who was honored with the Congressional Medal of Honor by President Harry Truman for saving the lives of at least 75 wounded men on one day during the WWII battle for the Maeda Escarpment (Hacksaw Ridge) in Okinawa. The story is told by men whose lives Doss saved on that day. It is a dramatic story of courage, honor, personal conviction, faith, fierce patriotism and heroism during one of the bloodiest battles of WWII where expected survival was only 1 chance in 10.

* This is special program being offered as a belated community recognition and celebration of Armed Forces Day, which occurs on Saturday, May 18, 2013.

* Eighteen youth cast members, in full period patriotic costume, of Ashe Counties Generation eXcellence will open the program with a musical tribute to America’s flag, the National Anthem and then pay honor to America’s Armed Forces with a dramatized medley of the service hymns of each branch of the uniformed services. Veterans in the audience will be paid special recognition.

(Pictures used with permission of desmonddoss.com)

The members of the New River Chapter of the Military Officers Association of America are pleased to host the showing of this documentary, produced and directed by Terry Benedict. The theatrical length documentary has earned 23 film festival awards and been shown on national television 12 times including the world-wide Armed Forces Network. It has been subtitled in four languages besides English and distributed widely in Asia and Europe. It is available at most video outlets, from desmonddoss.com and can be leased from NetFlix. The film is in demand by youth groups, Boy/Girl Scouts and school curricula on personal conscience, courage, leadership, patriotism and leadership. According to Col. Charles Knapp, U.S. Army Retired, local Ashe resident and sponsor of the film, “This film is a quintessential story of Duty, Honor, Country. It is the dramatic real life portrayal of what can happen to an ordinary life at the intersection of Personal Faith and Committed Patriotism.”

President Truman was heard to remark when pinning the Medal of Honor on Corporal Doss’ uniform, “. . . because of what you have done for your comrades and the country, this act gives me more pleasure than being elected President of our country . . .”

Not all heros carry a weapon. Doss didn’t. Some carry faith. Doss did.

Knapp is Chairperson of the Desmond Doss Council of the Georgia Cumberland Association in Calhoun, GA which is responsible for protecting the integrity of the Doss life story, film and book copyrights, and the extensive Doss collection of memorabilia on loan and in several university archives.

“Doss was a sought after speaker to youth groups and traveled the world. He would hold an audience of middle schoolers spell bound on normally dry topics of character development, personal faith and ethics and get a standing ovation at the end,” says Knapp who had known Doss for many years. “Roads, bridges, VFW halls and American Legion posts carry his name. His likeness in bronze can be found in veteran’s parks. The most notable is his full size bronze figure in the Georgia Hall of Patriotism in Centennial Square in Atlanta, GA."